All over natural sciences and engineering mass is being measured to characterize and design a large variety of high performance systems. Yet there existed an instrumentational void for weighing microscopically sized systems such as single cells or colloidal microparticles. Motivated by this problem and driven by innovation, Nanosurf now offers a unique solution that allows nanotechnological measurements of a new dimension: the PicoBalance. Whether as a stand-alone instrument or as an add-on to the DriveAFM, the PicoBalance enables users to noninvasively measure microscopic biological or material science systems reaching sub-picogram and millisecond resolution.

* as measured with an NSC35 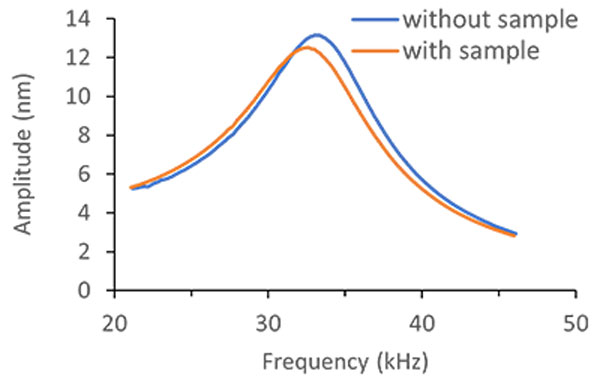 Mass induced frequency shift as seen in the amplitude response of the cantilever.

Mass determination with the PicoBalance is based on the measurement of the frequency shift that is induced by attaching the sample to the mass sensor, the cantilever. One area of application is the static size and mass characterization of colloidal systems, and their dynamic swelling properties in solvents. The combination with the FluidFM technology is of particular advantage – it allows fast and reversible attachment of the systems or the research of droplet-liquid interactions. Nanosurf has refined the mass measurement workflow and supplemented it with automatic procedures for preparing and executing the measurement. 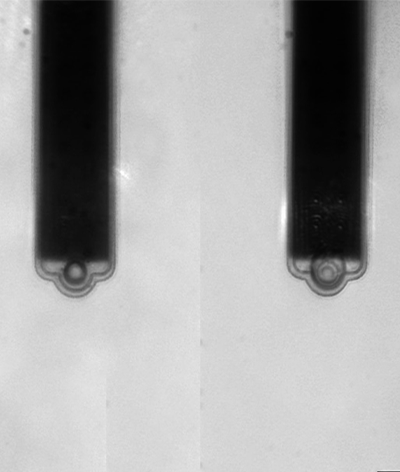 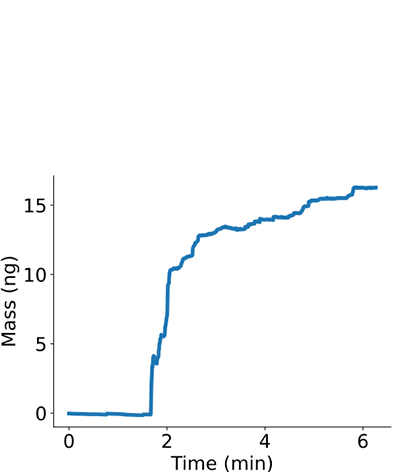 Mass increase of paraffin bubble over time at an applied pressure of 700 mbar. 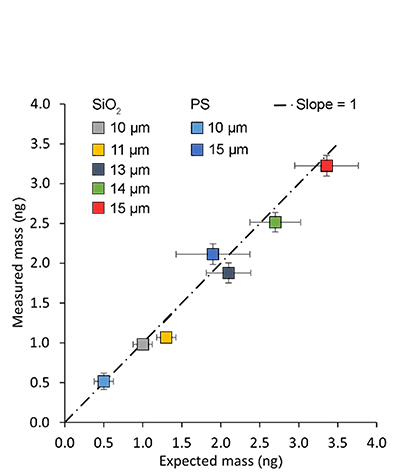 Measured vs expected bead masses. A straight line of slope 1 indicates the expected behaviour for an accurate, linear measurement.

Getting a new perspective on cellular systems

The PicoBalance also reveals new perspective on cellular systems found in fundamental, biotechnological and pharmacological research. Cells of varying sizes can be hosted on the cantilever, made to adhere by physiologically relevant substrates such as collagen, fibronectin, laminin etc. Researching the cell growth behaviour or the influence of chemicals on the cellular proliferation or function. The PicoBalance unlocks new applications in cell nutrition, mass regulation, disease related processes, and drug screening. The compatibility with transmitted light and fluorescence microscopy allows the correlation of mass measurements with cell morphology or cell state. All measurements can be performed under physiological conditions. 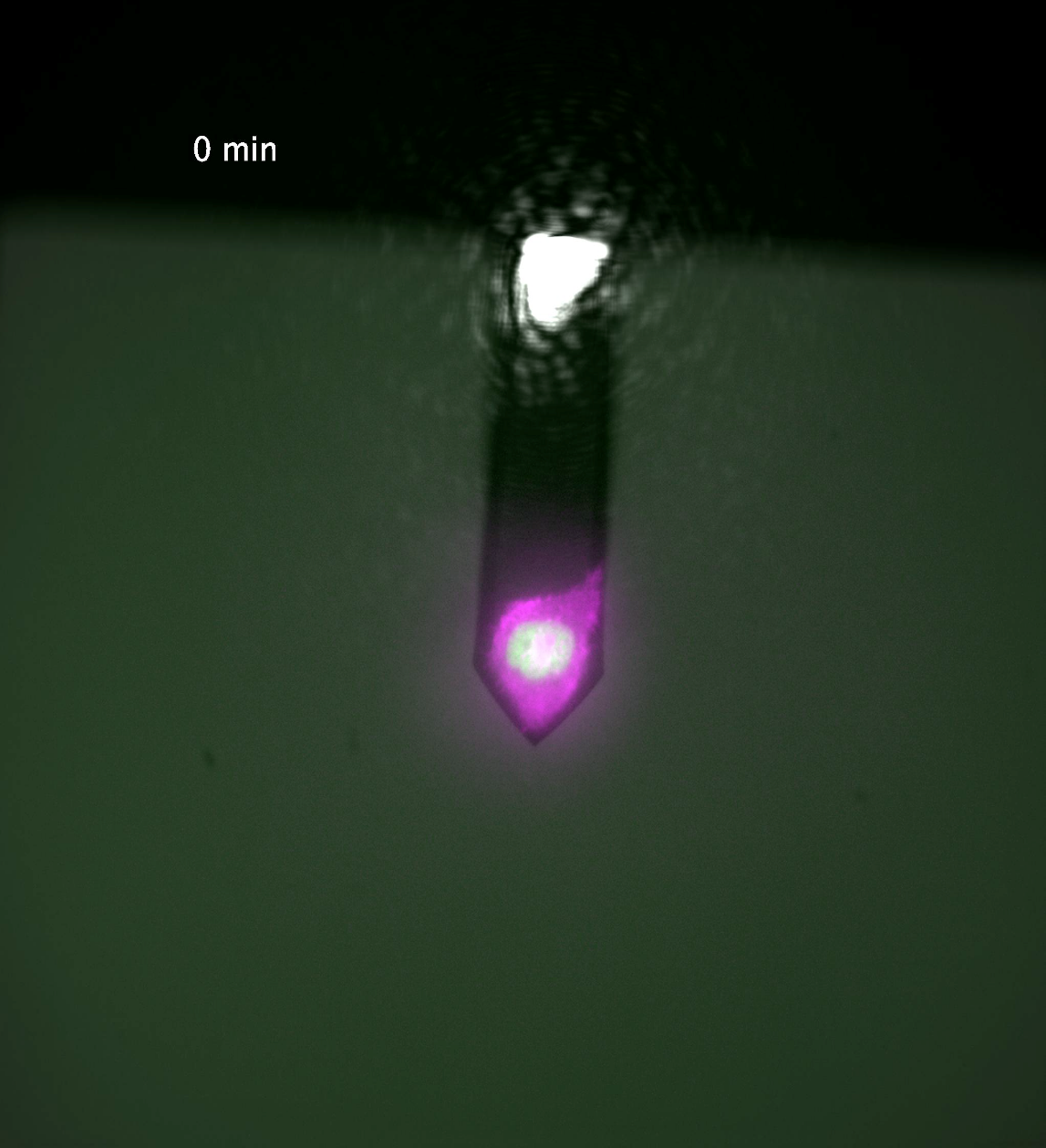 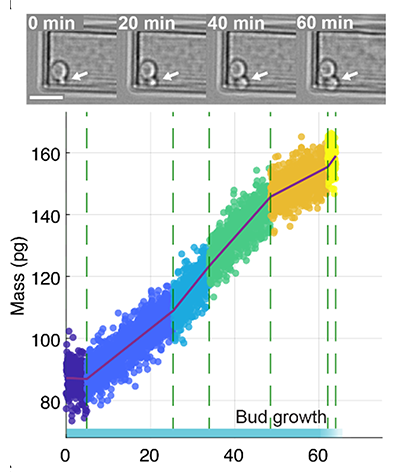 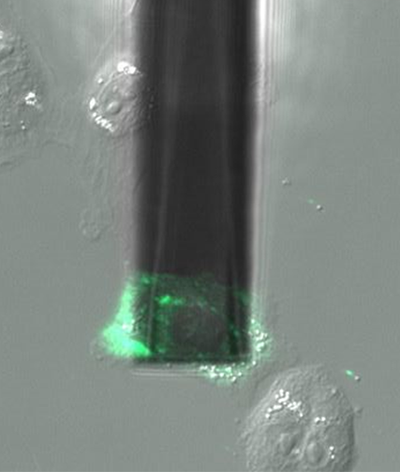 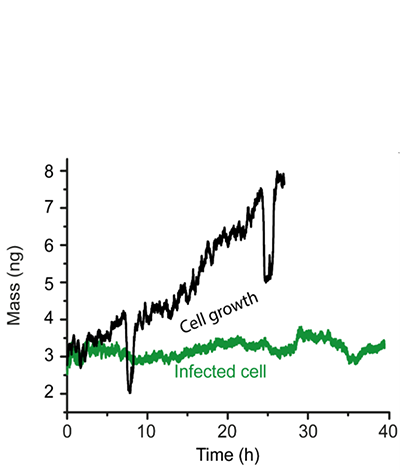 Healthy cell accumulates mass, meanwhile the other cell has stopped growing as a result of its infection with a smallpox virus.
Martínez-Martín et
al., Nature (2017). DOI: 10.1038/nature24288 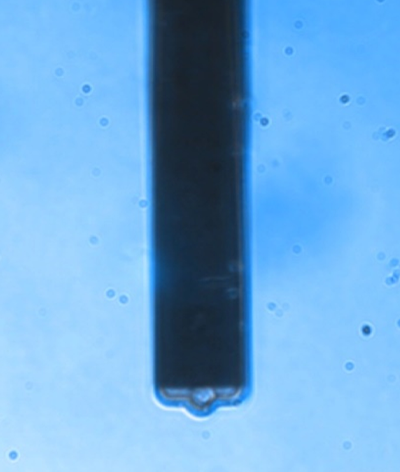 PicoBalance technology in the scientific literature

The PicoBalance and its underlying technology has been subject to several publications in leading journals: